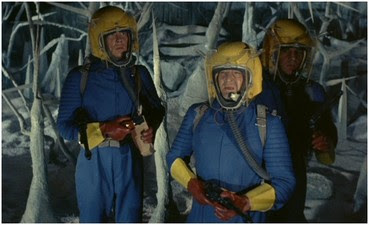 I've never seen this but I want to.  What was the point of all those rainy Saturday afternoons, late night Fridays and Wednesday night double bills watching BBC 2 if something like this can just slide on by unseen. 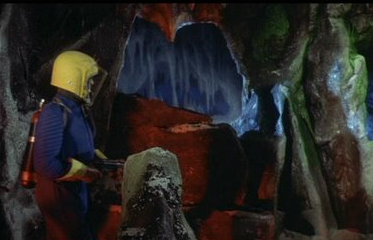 To paraphrase Wikipedia..... During a journey to an Uranus an alien presence briefly assumes control of the ship's crew. When they awaken they notice a long period of time has passed.  Upon landing on Uranus, they find a forested land oddly like our own rather than the cold, bleak world they were expecting. The forest is surrounded by a mysterious barrier and when one of the crew pushes his arm through it, it is freezes. New features and forms begin to appear each time they are imagined by the crew and soon they discover that they have been the victims of a mind controlling, one-eyed brain living in a cave. The alien brain plans to possess the astronauts and have them take it back to Earth where it will implement a plan for global domination. 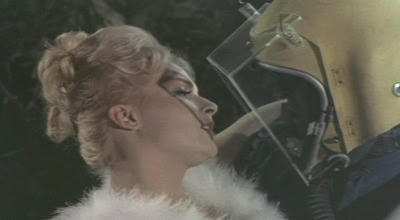 One assumes it doesn't, they don't and ultimately that the good guys win.  I'll let you know if I ever get to see it. 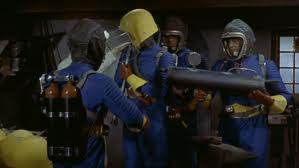 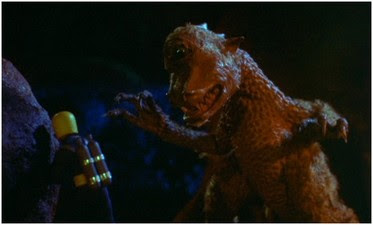 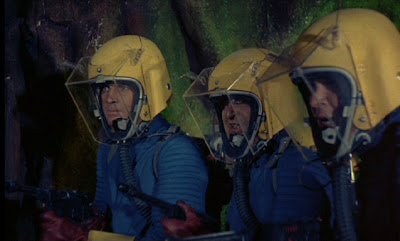 Email ThisBlogThis!Share to TwitterShare to FacebookShare to Pinterest
Labels: 1962, film, Journey to the Seventh Planet

Journey to the Seventh Planet (1962) Posters 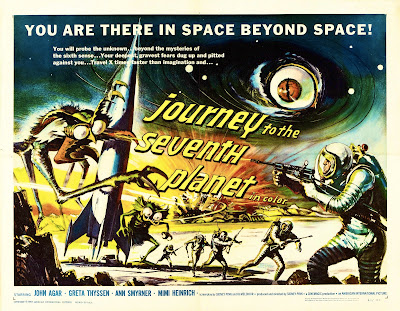 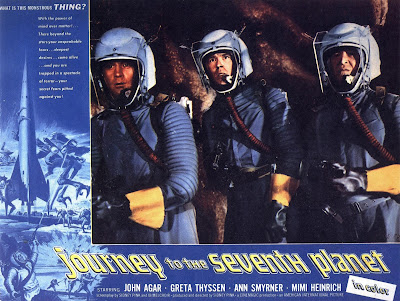 Email ThisBlogThis!Share to TwitterShare to FacebookShare to Pinterest
Labels: 1962, art, film, Journey to the Seventh Planet

Captain Scarlet and the Mysterons (1967)

Captain Scarlet and the Mysterons is, as I'm sure nearly everyone knows, another of the Gerry Anderson puppet shows produced by Century 21 Productions through the 50's,60's and into the early 70's.  First broadcast in the ATV Midlands area of the UK, Captain Scarlet is set in 2068 and sees the Earth at war with the mysterious Mysterons after a misunderstanding which resulted in the human astronauts on Mars destroying their base. 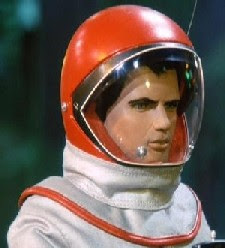 Being quite an unforgiving bunch, despite having the power to simply reconstruct their destroyed base, the Mysterons begin to rage a cold war on Earth using indestructible copies of people as their undercover corporeal agents.  Captain Scarlet was one such agent, originally working for the Spectrum Organisation, Scarlet fought the Mysteron control resulting in him becoming our best line of defence against the aliens deadly plans. 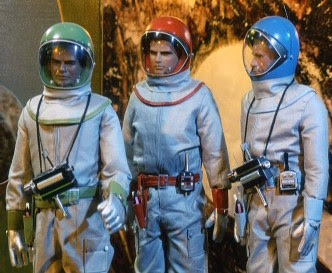 Captain Scarlet is probably my favourite Anderson Show for just about every reason.  It's a little bit darker, a little more realistic and a little bit cooler. There's a lot of good looking model work and design in the show and these two pictures don't do it any justice what so ever.  Go Google Image it.  Go have a look on Youtube.  Its all good stuff.
Steve
Posted by Steve at 11:46 4 comments:

Something for the Weekend 8

It's been a while but it's time for a little Something for the Weekend. 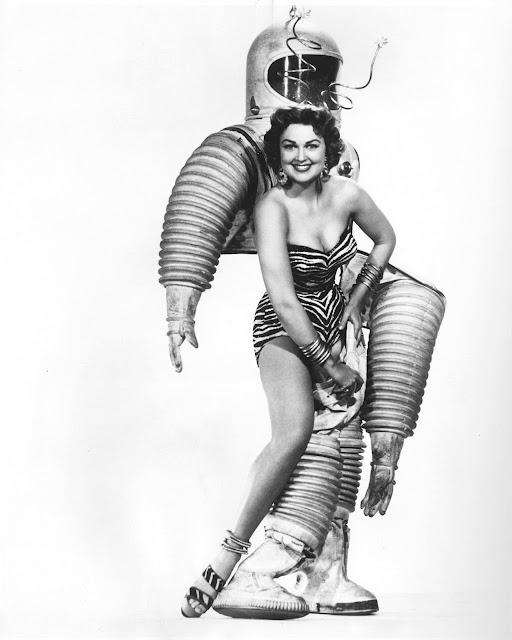 This is Joan Shawlee's publicity/glamour shot for Conquest of Space from 1955 but amusingly it just reminds me of this scene from Alien.... 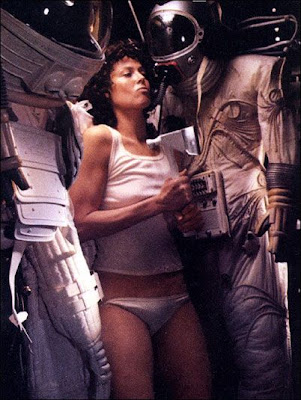 And now I'm imagining Conquest is a much better film than I know it to be.

Email ThisBlogThis!Share to TwitterShare to FacebookShare to Pinterest
Labels: 1955, Conquest of Space, film, Something for the weekend

The 1955 film Conquest of Space was based on a non-fiction book illustrated by Chesley Bonestell and written by Willy Ley.  The Conquest of Space was published in 1949 and presented a collection of photo-realistic paintings which dared to speculate on the wonders that awaited the winners of the space race.

Rather than make a pseudo-documentary of the source material, which might have made it more interesting, they found a bit of a plot and hung the visuals on the back of that.  It's of its time of course which make some aspects of the story a little clunky and dull but more unfortunately it lacks anything like the charm of other 50's sci-fi films which means it's failings tend not to be forgiven.  Though not loved it remains visually interesting so that you can still enjoy this gallery of fine looking space suits 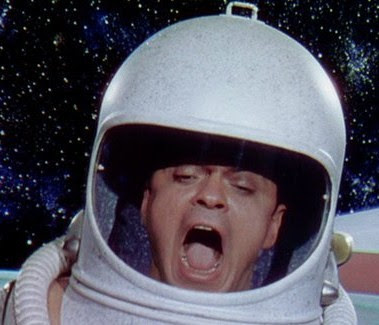 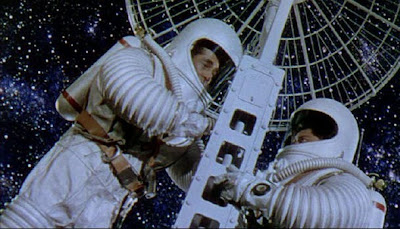 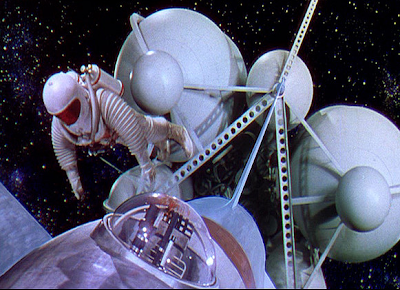 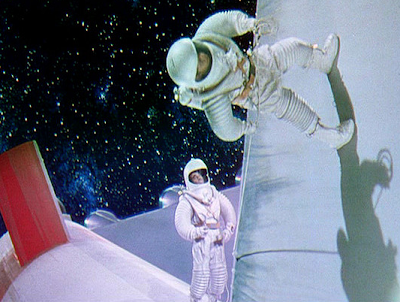 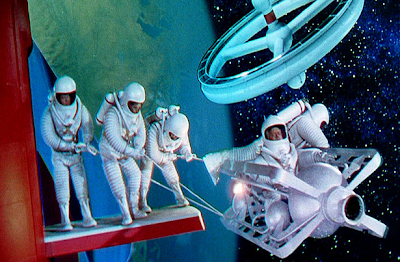 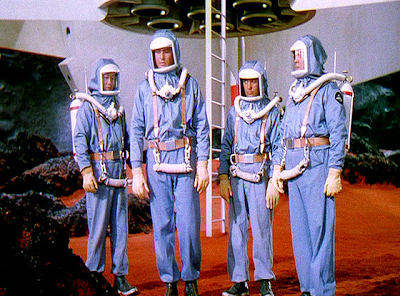 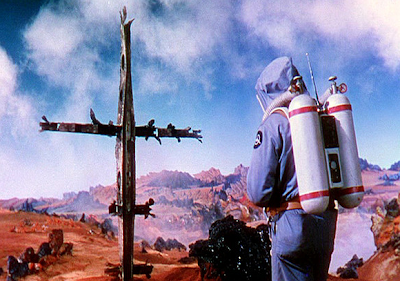