Something for the Weekend 7

It's been a while since I've done a; Something for the Weekend post but this makes the wait worth while I think. 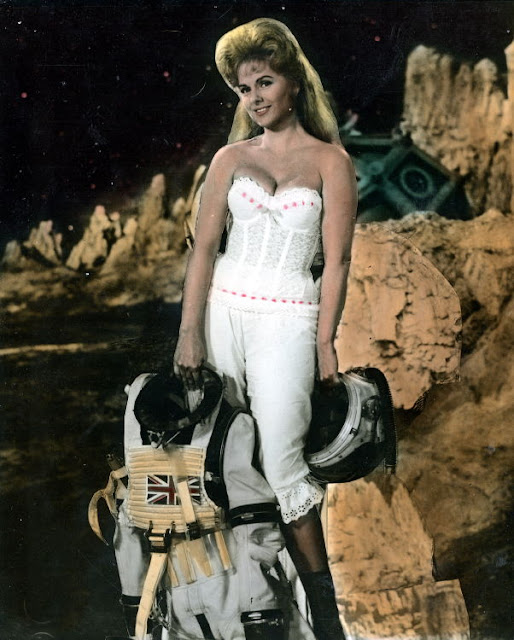 This is Martha Hyer in a publicity still for the 1964 film version of First Men In the Moon.  A lovely bit of ephemera this and brought to you just a soon as I discovered it.  There are a few other similar pictures out there of the scantily dressed starlet but I can only really justify showing this one on the grounds of the equally sexy spacesuit.

Hey Love, show us your Windak

Email ThisBlogThis!Share to TwitterShare to FacebookShare to Pinterest
Labels: 1964, film, First Men In The Moon, Something for the weekend, Windak

It's a reasonably well documented fact that after production of 2001 wrapped, Stanley Kubrick ordered the models, props and costumes scrapped so that they wouldn't resurface in other film productions and lessen his original in the way that they did in Forbidden Planet, for example.  Now bits of that film have turned up all over the place and for decades after.

Well Stan's plan was a good plan and it almost worked... but for the fact that nobody was watching for those cheeky skip-pickers that worked for B.B.C. tv.  Now these guys were expected to make something out of nothing on a regular basis and turn in movie quality work for pocket money prices.  And they did for the most part and I was and remain a huge fan of what they achieved.  They furnished my childhood dreams and made the imaginable seem real.   And they also managed to get their hands on one of these; 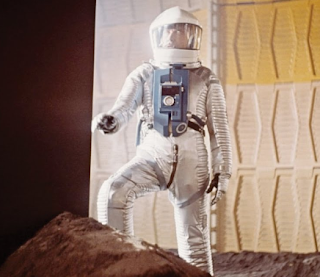 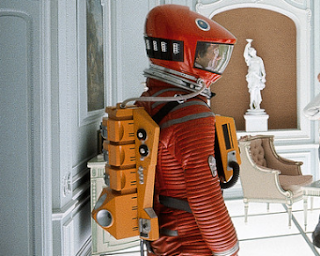 And a couple of these as well; 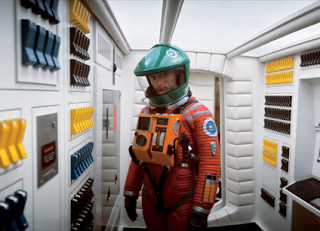 Which then resurfaced in the 1972 Doctor Who story The Mutants 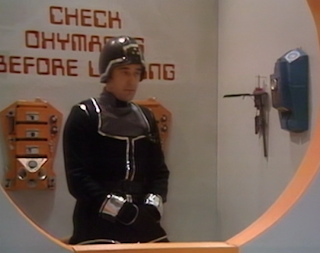 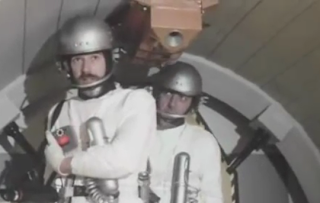 The Doctor Who story The Pirate Planet also from 1978 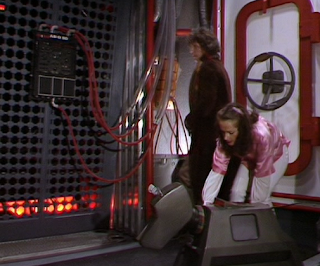 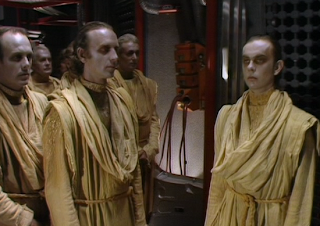 And another Douglas Adams penned Doctor Who from the following year; The City of Death, 1979 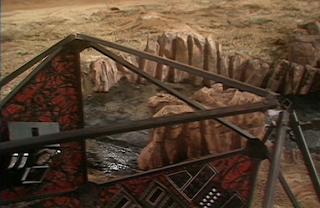 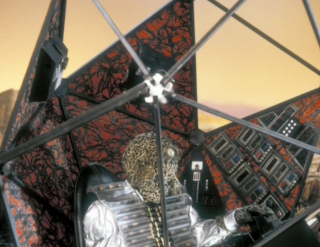 And do you know, given the gaps between some of those appearances, I'd put good money on the fact that there are more of these random acts of unauthorised recycling as yet unreported.
If you know of any others then drop me a comments and I'll add them to the list along with a name check.  I'll say thanks now in advance though because for reasons I can't yet find the time to sort out, I remain unable to reply to comments on my own blog except within these posts

So, Joshua, many thanks for your kind comments the other day and I will check out your recommendation.

We'll be back round this way again at some point to look at the original spacesuits designed for this film as well as a bit of a breakdown as to what it was all about and my own personal thoughts on it.  However, just for now, here's that blue spacesuit again as first seen in; 2001: A Space Odyssey. 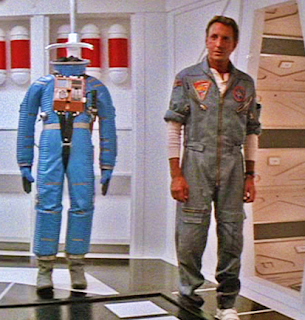 Except its not quite because this is a copy.  To maintain the integrity of his very original film, that cunning Mr Kubrick had ordered the props, costumes and miniatures destroyed after his production had ended and so much of what was needed for the sequel had to be painstakingly recreated from production stills.  And they did a pretty good job from what I can see but having gone to the cost and trouble of building the blue spacesuit again you most probably won't be surprised to hear that they didn't destroy it and it does go one to feature elsewhere.  Now we like that kind of recycling over here at this blog but Stanley must be spinning.

Email ThisBlogThis!Share to TwitterShare to FacebookShare to Pinterest
Labels: 1984, A Space Odyssey-2001, film, The Year We make Contact-2010

And finally... the one they left behind. 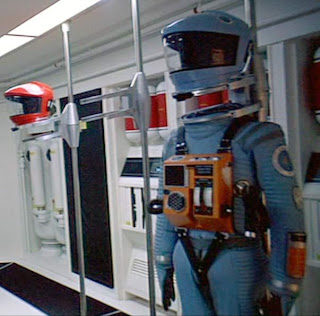 The blue spacesuit unworn in the film and left upon its stand.  Which is why we get to see it again, sort of, in the sequel and beyond.

Not Really A Spacesuit but... 2 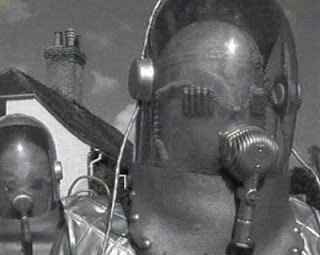 The Earth Dies Screaming, released in1964, uses the spacesuits first seen in the 1963 satire; The Mouse on the Moon. 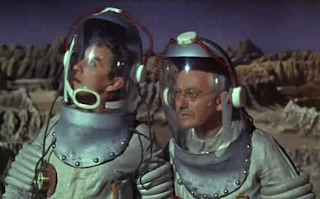 Here they’re used to dress the killer robots that have been sent to Earth to mop up the last few survivors of an alien plague attack. 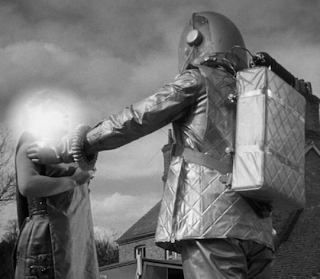 I’ve not had the pleasure of this little gem of British cinema as of yet but I will soon and I already know I’m going to like it. 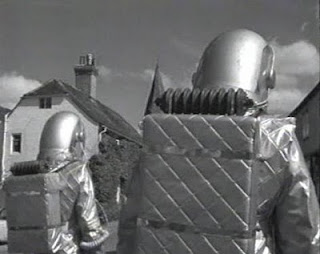 As a side note it was directed by the late great Terence Fisher who gave us Spaceways in 1953 which has also been covered previously in this very blog.

Email ThisBlogThis!Share to TwitterShare to FacebookShare to Pinterest
Labels: 1964, film, Not Really A Spacesuit but, The Mouse on the Moon 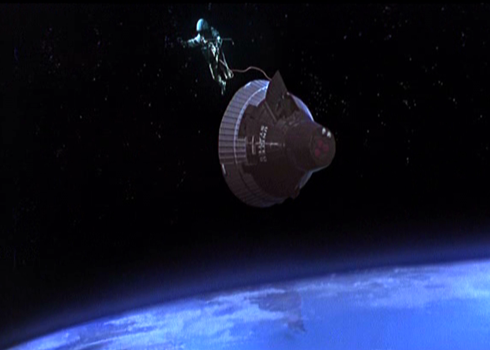 A spaceship that eats other spaceships and a plot to start a war between the Superpowers.  This is Bond at its most fantastically bonkers.

With space capsules going missing on either side, both the Americans and the Russians are blaming each other.  The world stands paused on the brink of a nuclear war.

The good old British Secret Service knows better of course, and sends Agent  007; James Bond, to a small island off Japan where Blofeld and the forces of S.P.E.C.T.R.E. are lurking as the masters of this grand manipulation. 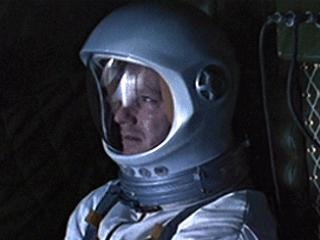 It’s almost too much and so you might well be forgiven for forgetting that there was anything so dull as a few spacemen sitting in spaceships somewhere at the start of this yarn. .. but not anymore.

Email ThisBlogThis!Share to TwitterShare to FacebookShare to Pinterest
Labels: 1967, film, James Bond, You Only Live Twice

The second of the Austin Powers films is still very much spoofing James Bond, Derek Flint and Jason King.  All of which are fairly easy targets but what you have to love about this sequel is the inspired invention of the Mini-Me character as played by Verne Troyer.  That was worth the cost of admission alone.

There's a plot in there somewhere but its not really important as its only a vehicle to hang the gags and 60's visuals off. Smashing! 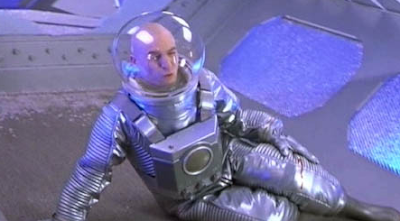 Any way here are the spacesuits which have very nice retro fish-bowl helmets and a suit design that has more than a passing nod towards Kubrick's; 2001. 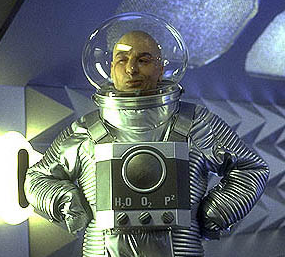