And here's the yellow space suit from 2001 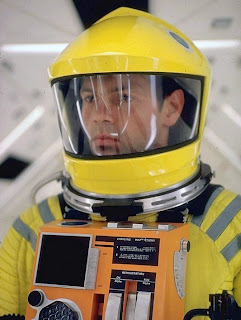 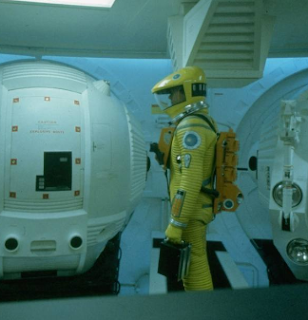 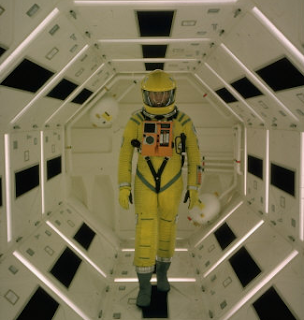 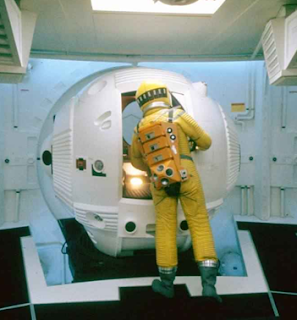 I like the green boots.
Steve
Posted by Steve at 16:33 No comments: 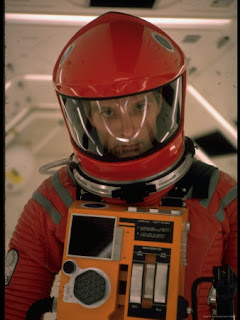 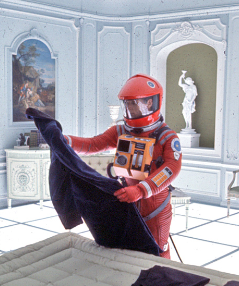 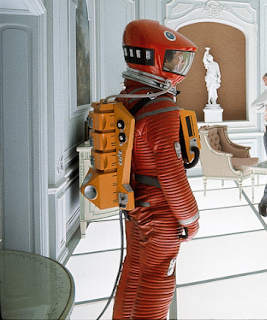 We’ve already looked at this film once before way back in December 2010 when this blog was less than a month old.  Back then we had a quick look at these;

Which, as you should all know by now, are the real world high altitude Windak pressure suits.  Lovely aren’t they. 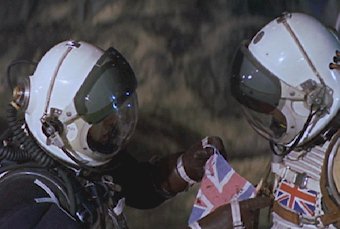 But what we’re going to look at now though are these;

Though First Men in the Moon starts and ends in the modern day of 1964, the bulk of the film is told in flashback to the 1890’s. 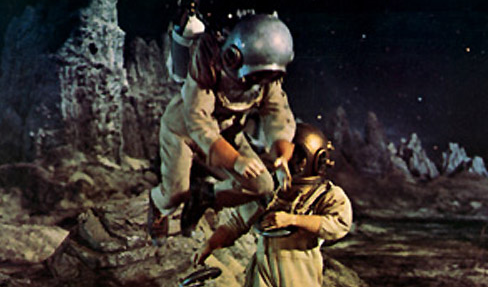 And that’s why Professor Cavor and Bedford’s spacesuits are based upon the deep-sea diving suit of the time even if they do seem to be serviced with oxygen from an anachronistic 1960’s style aqualung. 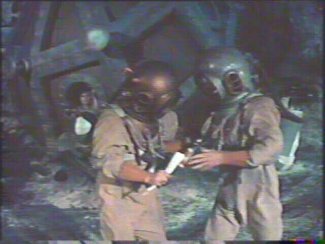 And also, it seems that the gentlemen of the British Empire were a sturdy bunch too who’s gloveless hands were impervious to the airless cold of the moon.

Oh and while we’re here on the lunar surface, let’s have a quick look at these. 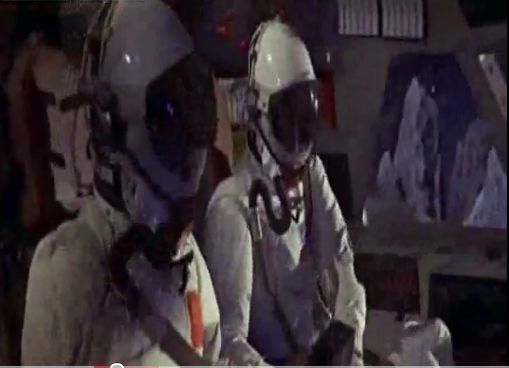 This is what the 60’s astronauts were wearing inside their spaceship before they climbed into their Windaks to go explore the moon. 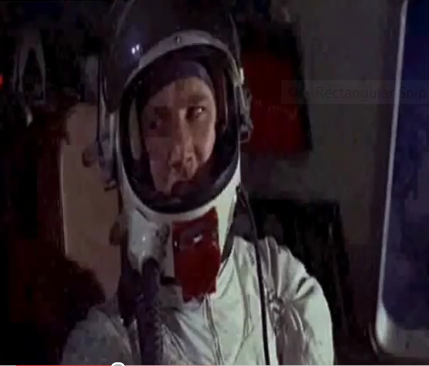 Rumour has it these are the same suits and helmets that are seen in the Department S episode The Man from X. 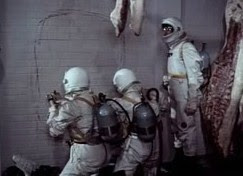 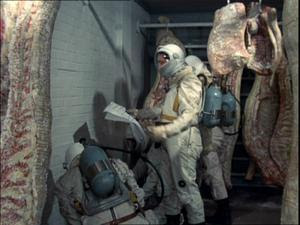 What do you think?

Not Really A Spacesuit but... 1

Hello and welcome to the first; "Not Really A Spacesuit but..."

As well as the dozens and dozens of spacesuits still pending in the image banks I've also got a few captures that for technical reasons are not actually spacesuits as such but are close enough to merit a look.. or, as in this case, have some special significance to us over here at the; Say; Hello Spaceman blog. 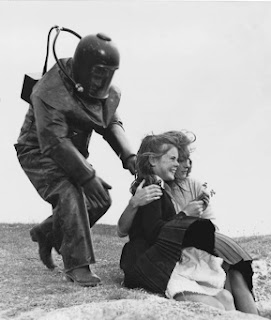 We're going to start with this recent find which is from the lesser known Hammer film; These are the Damned.  Its a very odd film this, well more like three completely different films bolted together.  There are rebellious biker gangs, incestuous undercurrents between seaside siblings, secret government bases and scary intelligent Wyndhamesque children.  Its a strange brew and quite dark and cynical for it's time and I really like it.

But all that aside, what's of interest to us here is an appearance of the Pathfinder helmets we've been previously tracking through various TV shows.  In These are the Damned it's used as part of a radiation suit for which it is every bit as effective.  The film was eventually released in 1963 but actually made in 1961 so this marks one of the early uses of this prop.  I'm sure there are even more still out there.

Email ThisBlogThis!Share to TwitterShare to FacebookShare to Pinterest
Labels: 1963, Not Really A Spacesuit but, Pathfinder Helmets 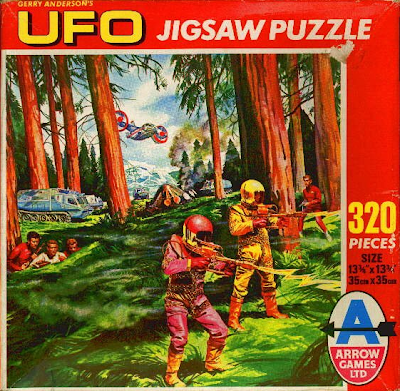 Here's an example of some merchandise for Gerry Anderson's UFO TV series.  This is one of three jigsaw puzzle designs produced by Arrow Games Ltd.  It's quite a nice bit of artwork in its own right but they had two attempts to get the colour of the alien spacesuits right and they got it wrong on both goes. 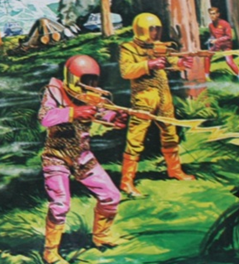 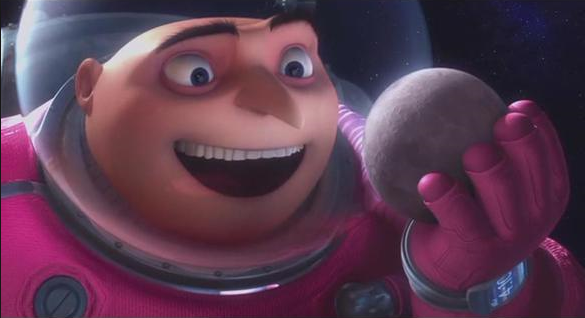 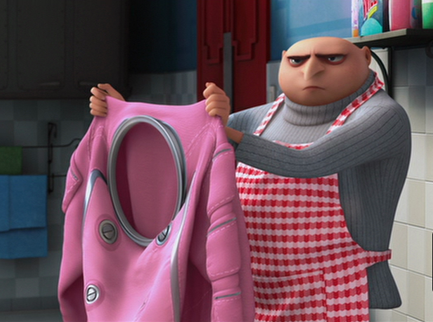 There is a lot to love about Despicable Me, so much in fact that its barley worth mentioning the rather nifty pink spacesuit.....but I just did so there you go. 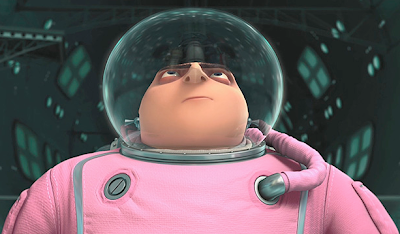 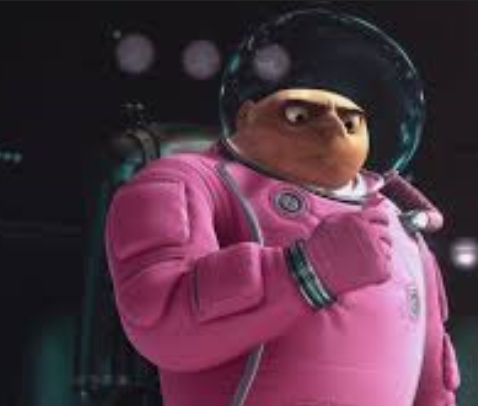