And here's another in the  Lord Tedric series of  books by E E Doc Smith, also published by Star paperbacks in the late 70's 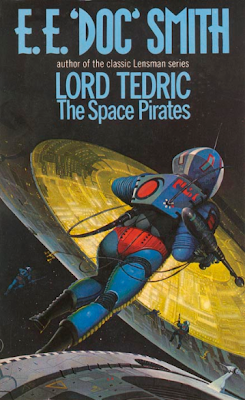 And its another example of the fine brush work of Peter Jones although there's a hint of Chris Foss about this piece with some sharp angles and deliberate colour clashing that seems at odds with the artists usual sleek design.  I guess it would have been hard not to be influenced by Foss, who seemed to be painting nearly every other sci-fi cover going back then although his speciality tended to be massive space ships rather than our much loved spacemen.  For examples of his work you only have to look as far as most the other E E Doc Smith covers from the time. 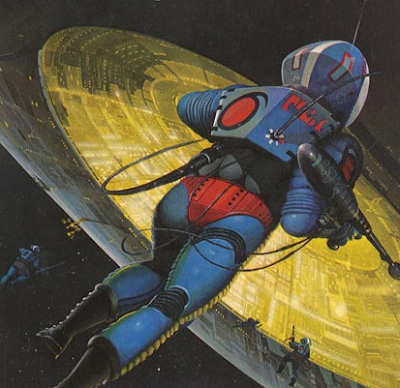 Still, there's enough of Jones' own stylings here to be able to recognise and appreciate it. 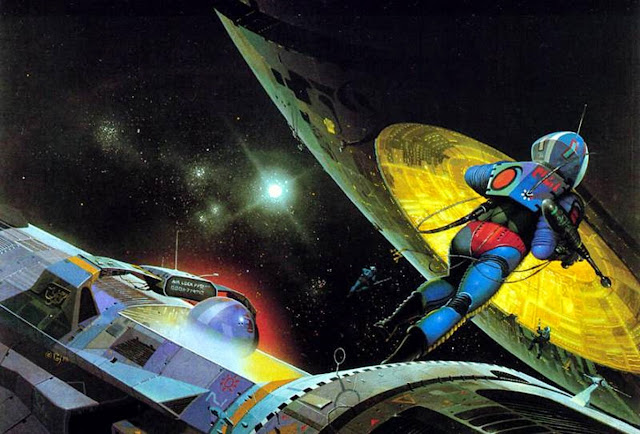 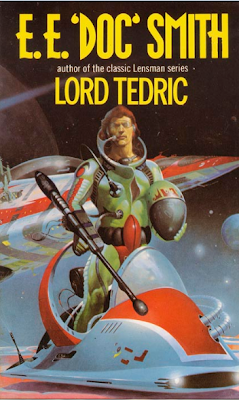 The artwork is by the rather wonderful Peter Jones, who we've looked at before in this blog and who I think we'll be looking at again in the near future because each new example is such a treat for the eye and heart. 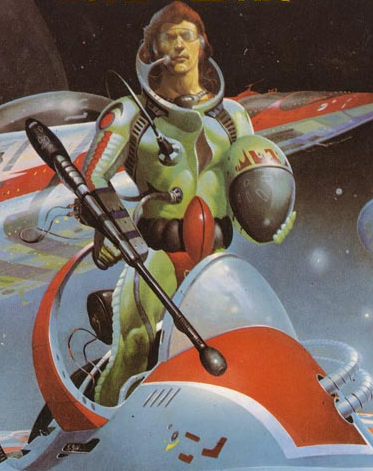 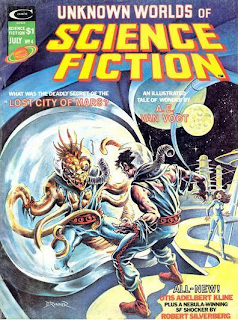 As well as both of these particular covers featuring spacemen they are also both by legendary comic artist Frank Brunner. 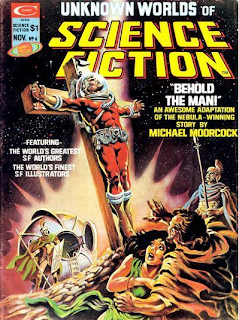 I really like his take on Michael Moorcock’s Behold the Man, even though it’s not strictly accurate in its interpretation of the text it must still rank as one of the most stunning comic covers of the 70’s. 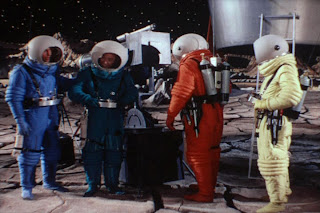 I watched this film last weekend for the first time in forever and I have to say I loved it.  It’s an absolutely charming bit of sci-fi that must have stunned audiences back in the day with its surprisingly accurate speculation about man’s first trip to the moon. 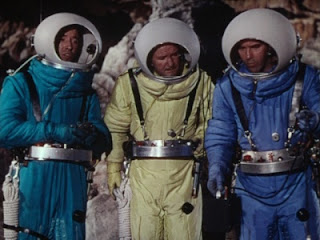 They get so many of the details right and you have to bear in mind they were almost two decades off doing the real thing back when this was made in 1950. 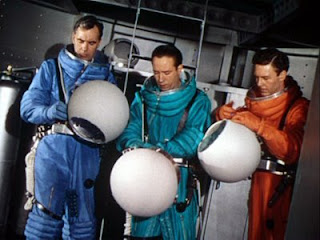 In regards to the space suits, this is one of the earliest if not the first appearances of this particular classic piece of 50’s design and there’s even a scene within the first twenty minutes or so where they explain the bright colours as a way for each of the astronauts to recognise one another when they are on the moon. 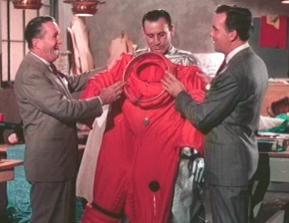 It also explains that this is just the covering that goes over the top of a pressure suit, acknowledging some of the science of space travel that usually gets glossed over in the name of style and story. 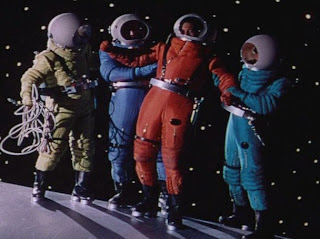 If you were plotting a course through the history of sci-fi space films, and that’s sort of what we’re doing here by default, then this would have to be one of the earliest and most important films ever made. 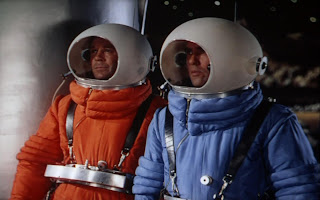 If you haven’t yet then you should and as soon as possible!

Published by Paper Tiger in 1980, Solar Winds is a collection of the sci-fi artworks of Peter Jones. 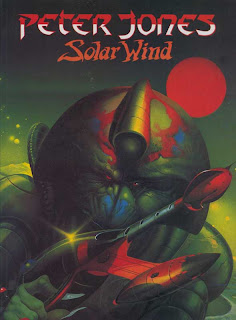 And from it's pages I have here a couple of close-up scans of Peter's take on the spaceman. 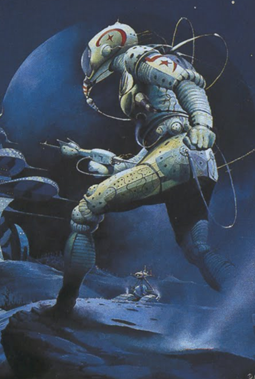 As you can see there's an original sleek design at play here and an aesthetic consistency between the two outfits. 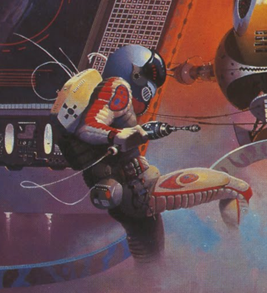 I'll see if I can track down some further examples of this artists amazing take on the spacesuit because he certainly adds something quite unique to the heritage. 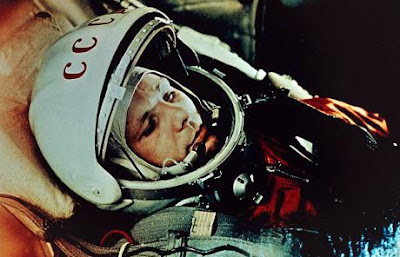 The first man in space and the first man to orbit the Earth; Yuri Alekseyevich Gagarin, 12th of April 1961 in Vostok 1. 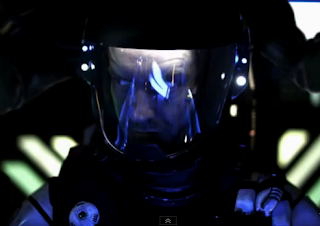 Screen caps for The Final Frontier video by Iron Maiden. 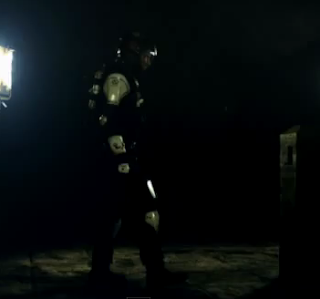 As space suits go it does the job but looks like its made for a small budget, pieced together from bits of protective body armour from various dangerous sports. 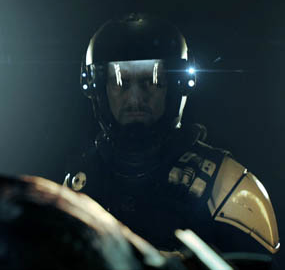 Still it is nice to see someone doing sci-fi based pop videos and so adding to the history of the space suit
Steve
Posted by Steve at 15:42 No comments: 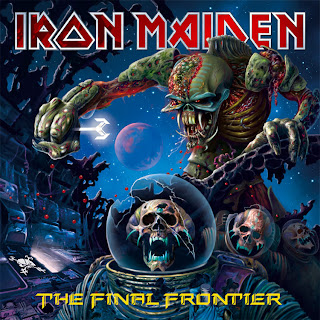 The artwork, with and without titles, from Iron Maiden’s 2010 album; The Final Frontier. 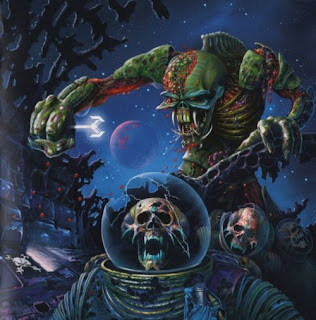 An Alien redesign for Eddie, the band's monstrous mascot but they seem to have gone a little further back than that for the space suit designs which have a very retro 50’s/60’s style.  Slightly disappointingly this is not the same look of the space suit which is seen in the bands video although that's nice enough but very modern. 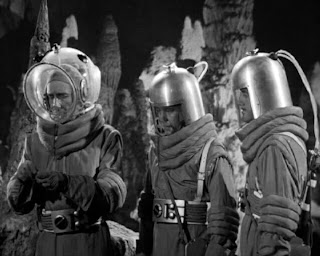 Five male astronauts travel to the dark side of the moon and discover a cave with a breathable atmosphere. Venturing in they find the remains of a buried city and the last surviving members of a 2 million year old civilization, who all happen to be sexy leotard dressed women.  Though greeted with food and drink, little do our male astronauts realise that the Cat-Women are really just after their rocket ship. 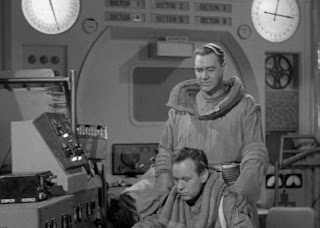 There are a few films with this general war-of-the-space-sexes plot but I think this is the first of them.  Beyond that it’s a pretty cheap effort with inconsistent continuity, a paper-thin plot and borrowed sets and costumes.  That said it really is that bad that it’s good and so it has its fans. 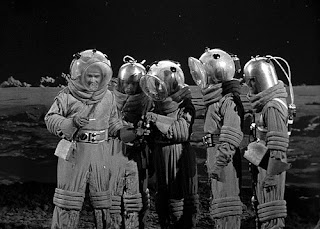 Looking at the space suits it’s interesting to note, and for no discernible reason, that we’ve got a mix of  suits here with a couple of them being from Project Moonbase and the others from Destination Moon. 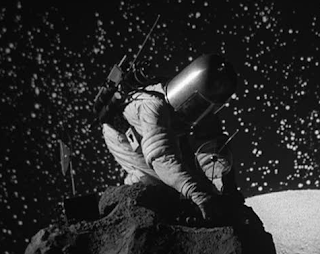 Based on a story by Robert Heinlein and set in the distant future of 1970; Project Moonbase concerns it’s self with the US’s plans to build a base on the Moon and the rocket crew they send to survey for potential landing sites from orbit. 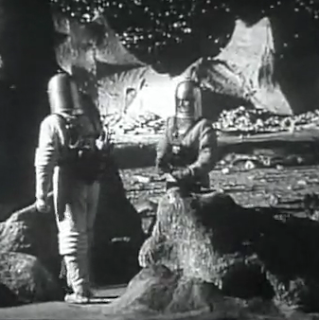 Unfortunately this simple mission goes horribly wrong when they discover that one of them is an impostor with designs on crashing the rocket ship into an earth orbiting space station upon the return journey.  There’s a bit of a struggle and they end up having to land on the moon.  Some more stuff happens, some quite groundbreaking (for its day) sexual equality is displayed and then turned on its head and eventually two of them promise to marry while they await rescue from earth. 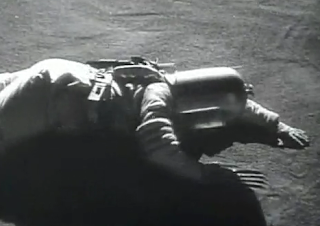 The space suits are of the ribbed joint variety we have come to expect from US TV and film of the 1950’s although the helmets, at least, appear somewhat alternative to the conventions of the decade.

Something for the Weekend 5 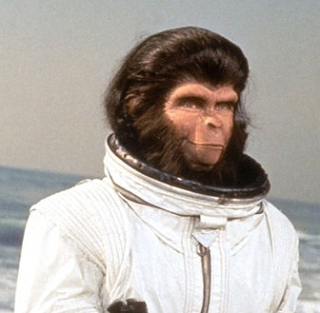 Zira was of course played in this and in the previous two films by the equally delightful Kim Hunter.

Email ThisBlogThis!Share to TwitterShare to FacebookShare to Pinterest
Labels: 1971, Apes In Space, Escape from the Planet of the Apes, film, Something for the weekend
Newer Posts Older Posts Home
Subscribe to: Posts (Atom)